John Constantine: Hellblazer – All his Engines 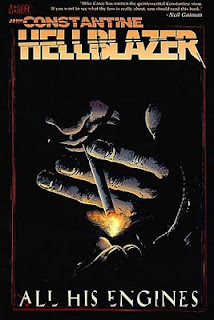 This trade is everything Constantine should be. There's a plague of inexplicable comas affecting children all over the world; when one of the afflicted turns out to be pal Chas's niece, John Constantine dons his stained and wrinkled trench coat and does what he does best.

But tracking down the solution to this little problem isn't easy, and the answer for once isn't in London. John and Chas head to Los Angeles to get the root of the dilemma, and soon find themselves in thrall to a powerful demon with oodles of power, a cunning plan and a little slice of Hell in a back room.

Very little is cut and dried when Constantine's involved, and in this case, the story develops into a gang war among demons and a fallen Central American god. As is usually the case, Constantine does little real magic of his own; he's a thinker and a planner, and at his best he sits back and lets others do the real work for him. Sometimes, of course, they die in the process.

Mike Carey is best known for his work on Vertigo's Lucifer series, and the similarity in atmosphere and the interplay between devils and angels stands him in good stead for a Hellblazer yarn. He doesn't let us down here, seizing on Constantine's character like a natural.

Leonardo Manco's art is well suited to the story; it's dark and gloomy, often in shadow, and even bursts of fire seem muted, somehow. Demons manage to look freakish and scary without sinking into goofiness, and Constantine looks exactly like he should; a lot of artists over the years haven't been able to get the character's appearance down right.

Constantine fans should love this latest installment of the Hellblazer mythos. People who've only seen the movie -- assuming they haven't been turned from the Constantine name forever -- will likewise enjoy this as an introduction to the far superior series in print.

It occurs to me that this trade would have made a far better movie script than the one that actually made it to the big screen. Hollywood could learn a lot if producers and directors paid occasional attention to writers and artists.

I only wish that Vertigo would have numbered the Hellblazer trades so that I could read them in sequence. Other than that minor annoyance, this is a trade well worth adding to your collection.
Posted by John "Zanziber" Rogers at 6:00 AM
Email ThisBlogThis!Share to TwitterShare to FacebookShare to Pinterest
Labels: #ThrowbackThursdays, Reviews