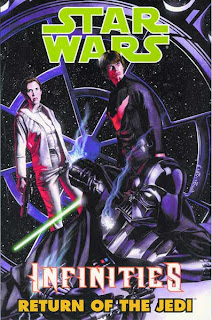 The Infinities series explores tantalizing "what if" stories about what might, have happened to Star Wars characters if events had occurred differently. In this tale, the rescue of Han Solo from Jabba's Palace fails, so Princess Leia goes after Boba Fett in order to save Han. The climatic events on the second Death Star also takes a different turn that sees Darth Vader changing his allegiances and fighting alongside his children!

I personally enjoyed this trade not only because I am a big fan of Star Wars, but also because I enjoy the writing of Adam Gallardo. He has a good grasp on the classic story behind the re-envisioning. Our heroes are scouring the galaxy trying to find Boba Fett, who happened to have taken the still frozen in carbonite Han Solo from Jabba’s palace. The ending is incredible, and this series inspired Hasbro to make a comic 2-pack in 2008 which included a copy of the #4 issue from the original series along with action figures of Darth Vader and Princess Leia.

My only regret with this trade (and all in this series) is when I was ready to read it; the pages became separated from the cover. The good thing is… as I’ve posted previously… when I reached-out to Dark Horse to inform them of this problem, they sent me a replacement copy with better binding.

Buy this trade and add it to your collection. There are 2 more volumes to enjoy as well.
Posted by John "Zanziber" Rogers at 6:00 AM
Email ThisBlogThis!Share to TwitterShare to FacebookShare to Pinterest
Labels: #ThrowbackThursdays, Reviews