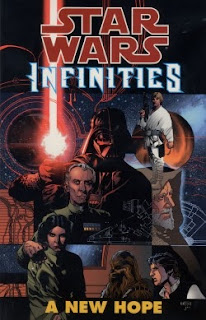 Marvel has the “What If” series, and DC has “Elseworlds”. Dark Horse has “Infinities”. We all know the story behind this trade… from beginning to end; it’s a tale that’s lasted over 30 years. What if something minor happened to change the entire story? What would happen if the proton torpedoes that Luke fires into the Death Star failed to detonate? How would this single incident change the entire landscape of the tale we know so well? In this trade, we find out one possibility.

The writing on this trade is great, and the storyline draws you in and keeps your interest. The art isn’t the greatest, but it gets the job done. The great thing about this trade is that it follows through to completion… namely the end of the empire: 3 movies in a single trade.

The biggest issue I had with this particular trade is that the binding was shot when I opened it the first time. The pages of the entire trade become detached from the cover. If I spend $13 on a brand new book at Borders or anywhere, I expect it to be in good shape and not fall apart when I open it. The good thing is… as I’ve posted previously… when I reached-out to Dark Horse to inform them of this problem, they sent me a replacement copy with better binding.

In this trade, we see oddities that some never thought would ever be. Leia being groomed by Vader and the Emperor to be a poster child for the Empire and a Sith apprentice. Han Solo taking Luke to Dagobah so he can find Yoda and learn to become a Jedi. C-3PO re-programmed to not only be subservient to Leia but also serve the Empire. And Yoda takes charge of the Death Star.

Buy this trade and add it to your collection. There are 2 more volumes to enjoy as well.
Posted by John "Zanziber" Rogers at 6:00 AM
Email ThisBlogThis!Share to TwitterShare to FacebookShare to Pinterest
Labels: #ThrowbackThursdays, Reviews