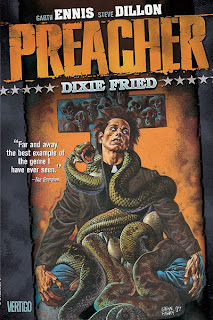 After a brief vacation from the storyline in volume 4, we come back to the the quest to find God. To start, we have an history lesson about Cassidy and his days in New Orleans, and we are introduced to Les Enfants Du Sang. I've met some fairly serious goth's in my life, but Les Enfants take the cake above and beyond. They take goth to a whole new level of EMO.

And then, we have the inevitable reunion of Jesse and Tulip. In volume 3, you'll remember that Jesse left her in France to take on the Grail and save Cassidy by himself. You've heard the saying "Hell hath no fury like a woman scorned", right? You would think that Tulip would be seriously pissed about being left in France. At first glance, it looks as thought all is forgiven. At first glance.

With Cassidy's help, Jesse finds a way of getting in touch with Genesis through voodoo. Talk about an odd mixture. When Cassidy helps you out, you know nothing bad could go wrong. If you belief that, there's a bring somewhere with your name on it. Of course, Cassidy's past comes to haunt the entire gang. I think that by the end of this trade, Cassidy would have learned to make amends for his past.

In the middle of this trade, we have our favorite minor character: Arseface. He's out for blood for what happened to his father by Jesse using The Word on him. Of all places, they meet up in New Orleans. Without using The Word, Jesse convinces Arseface to forgive him and he and Cassidy show him a good time. First off, they pay for him to get laid. That goes over well. Then they take him on the town and he ends up getting a recording contract.

I really love the fact that you never truly know where the story is going to go. Garth Ennis is a masterful storyteller, and Steve Dillon works his artistic magic to make the words come to life. Vertigo found a great team, but I wish the story didn't have to end. Comics like these were not intended for children, and I'm glad I was able to find them when I did. Sometimes you want to read something that takes you back to childhood, but other times you want to read something like this that reminds you that you're an adult... with a sick sense of humor. Enjoy and continue down this path for more goodness.
Posted by John "Zanziber" Rogers at 6:00 AM
Email ThisBlogThis!Share to TwitterShare to FacebookShare to Pinterest
Labels: #ThrowbackThursdays, Reviews