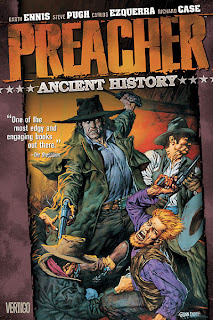 In this volume of the Preacher series, we have a brief interlude from the story of Jesse, Cassidy and Tulip and focus on some of the other players in the series. Here we have 3 stories of character we've all met and either loved or hated. I remember the first time I read through this trade and feeling a better connection to the series after reading this volume. I hope you feel the same way.

The first of our trio of stories is based on the history of our cover character for this trade: the Saint of Killers. You wouldn't think that he could have been as cold and blood thirst as he is before he became the saint, but you'd be wrong. Here we find that he's been blood thirsty since his time with the confederate army. The surprise love of a woman found after a massacre help to provide a small ember of feeling in his cold, dead heart. The birth of his daughter seems to fan the flames to warm his heart for a few years.

The switch is flipped back when he's traveling to get medicine for his wife and child and he becomes stuck by a blizzard in the backwater town of Ratwater. He slips in without much care, but while trying to eat his meal, he's accosted by a group of bandits that have decided to stay in Ratwater. Unfortunately, this takes away just enough time to allow his daughter and wife to die. Thus begins his rage. When he seeks vengeance and comes up short, he finds himself on the long road to Hell. It's here where he finally becomes the Saint. Hell of a story.

The next part of this trade is the story of you-know-who; otherwise known as Arseface. We've always wondered how he became so disfigured, and here's the tale that we've wanted to read. How much of an effect did Curt Cobain have when he killed himself? This well written piece makes the entire trade worth buying. Arseface is probably my favorite character in the entire Preacher series... save the 3 main characters, of course. The art isn't the best, but Garth Ennis' writing makes up for it.

Last buy not least we have a tale of the good old boys; Jody and T.C. You thought that we'd never hear from them again since Angelville, but this trade is about ancient history. It's not a pretty tale, but it is pretty funny once the smoke has cleared. The art and writing in this final tale are what we've come to expect from this series. You may not like these guys, but you'll enjoy this story.

Add this to your collection and keep it growing. We're now over halfway through the series. Don't quit yet. It's just getting interesting.
Posted by John "Zanziber" Rogers at 6:00 AM
Email ThisBlogThis!Share to TwitterShare to FacebookShare to Pinterest
Labels: Reviews