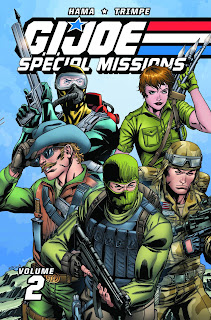 In the continuing epic that was my childhood, IDW has continued to publish G.I. Joe. We are again transported to the Cold War era and reminded of our past. The beauty of the Special Missions series is that Larry Hama didn't have to placate the folks at Hasbro with these stories. These are for the true and tested, die hard fan of G.I. Joe.

The only problem with this series is that there's no continuing storyline that ties it all together. The only thing that keeps this book interesting is the writing and the characters. Each issue (or trade) can be read as a standalone, which is nice for some. Right now, I think it would be great if there was a title developed that had a specific set of G.I. Joe personnel that worked the Black Ops side of the team. It could be that I play too much Call of Duty and it's bleeding into my reading interests. Either way, I think it would be better.

The art for this series is good, but very dated. You can tell that it was published in the 80's, and not just by the Cold War stories. I think this may have been one of the main reasons why I only read the first 12 to 15 issues on first release. It didn't really grab me as a teen, but I do appreciate this trade and series as an adult. There may not be an ongoing story to keep the entire series together, but Hama's masterful writing keeps you enthralled. There's not always a Cobra presence in this series, which was another turn-off when I was younger.