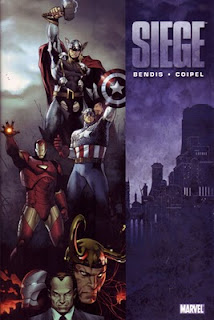 Finally, the Dark Reign is over. This trade represents the end of H.A.M.M.E.R. and Norman Osborn's Avengers. Asgard has been brought to Earth, and everyone's fearful of what that means. What few people know is that Loki is manipulating both Asgard and Obsorn.

No one could ever imagine what the Sentry would be capable of if properly (or improperly) motivated. How does a God fair up against the power of Bob? We find out when he and Ares go tooth and claw against one another. Only one remains standing at the end of their battle. What does this outcome mean for the future?

Through the Dark Reign storyline, we've seen the decline of Norman's mind. We've seen that internally he's been at odds with the Goblin, and it may be that the Goblin wins. I'd think that this wouldn't be a very good turn of events for the "reformed" Norman Osborn. He's professed that he's alright from the beginning, but was that all a ruse to get the Green Goblin into power as Osborn?

From Civil War to Secret Invasion and the Dark Reign, this story finally brings the world's superheroes back together under a single banner. To Hell with the registration act, and who cares that there were divides between long time friends. This story brings together a new set of Avengers, bridging the old and new. And we also have the return of Thor to the ranks of the Avengers.

As much as I enjoy reading Bendis' work, I've had a hard time truly enjoying the Dark Reign and Siege stories. I think that if I had stayed better connected to the events preceding these stories, I might have found them more appealing. It's no fault of Bendis, but more the actual storyline that I have issue with. In the 80's I was pro Marvel and I barely read anything else. In the 90's, I expanded my horizons to include other publishers, but I was first and foremost a Marvel fan. Any more, I would prefer to read stories from Vertigo or IDW over Marvel. What does that mean for my taste in reading? Have my tastes evolved or have the stories from Marvel become so hard to enjoy?

In any case, for those who have been enjoying the continuing Marvel universe storyline, this is well worth the time. I think that reading the companion volumes to this trade would also help the story as a whole.
Posted by John "Zanziber" Rogers at 6:00 AM
Email ThisBlogThis!Share to TwitterShare to FacebookShare to Pinterest
Labels: #ThrowbackThursdays, Reviews