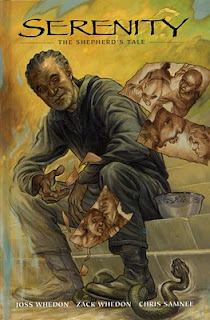 When I saw the first commercials for Firefly on television, I was excited to watch it. Finding the day and time it was on at any given week was sometimes near impossible, so I never actually got a chance to watch it first-run. My father had, and he enjoyed it greatly. When I hear that it was off the air, I was very saddened that I never got the chance to watch it.

Fast-forward to several years later, and I get the complete series and Serenity on DVD for my wife and she spends her entire Christmas break watching it. She draws me into watching it when I can, and I am sucked into the series. When I found out that Joss Whedon was writing more Serenity to fill in the gap between the series end and the movie as well as some things left open from the movie, I was all sorts of excited.
Shepherd Book has always been one of my top favorite characters from the series, and Whedon gave him a shady past that would have probably been examined closer had the series lasted for more than a single season.  In this trade, we learn about the secrets behind the man.

In the series, they elude to him having served in the Alliance at some point. The story in this trade works backwards from his death in the movie... going back several years at a time, and takes us clear back to his childhood to help us truly understand what makes Shepherd Book the man he is and was. This format works well if written well, and the Whedon’s write it well.

The art is a great compliment to the writing, but it’s not all that great. When I think of great artwork in comics, I’m thinking along the lines of Jim Lee or Marc Silverstri. Chris Samnee captures the essence of this trade, but I wasn’t pulled in our enthralled by it. The story makes this book was it is.

I would love to see something similar done to most of the cast of Firefly/Serenity… especially if it has a tie-in with a particular episode or the movie. I’m sure if Joss Whedon wanted to, he could make that magic happen. He may be doing it, but we don’t know yet. Let’s keep our fingers crossed and put this book in our collection.
Posted by John "Zanziber" Rogers at 6:00 AM
Email ThisBlogThis!Share to TwitterShare to FacebookShare to Pinterest
Labels: Reviews