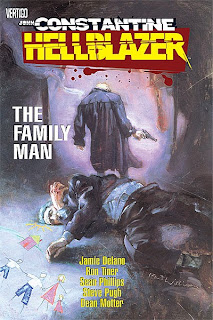 When I saw the movie Constantine, I knew I would enjoy reading the series. I have always been interested in the occult and the supernatural. It wasn’t until recently that I actually sat down and started reading it. I started with the earliest trade I could find. I got this trade as a part of a birthday present.
The writing in this trade is interesting but odd because of the British accents being written. It did give the sense of being in Great Britain, but sometimes it would have been nice to be able to read what was meant rather than what was said with accent added. This is a change from trade to movie I’m glad was made. Please don’t get me wrong. I enjoy listening to a good British/English accent from time-to-time, but reading it can be tedious at times.
Occasionally, the panels would also be hard to follow. On one page the flow is standard left-to-right and down a row. The next series is meant to be read across the entire two-page spread. A few time in this particular trade, this also lead to some particularly confusing dialogue. Whoever set the panels for these anomalies should have taken better care is making sure the reading knows where the flow of the story is going rather than just spilling the entire story across two-pages.
Because Hellblazer has been around since the late 80’s, the art is a throwback to that time. Before the popularity of artists such as Michael Turner, Todd McFarlane and Jim Lee, there was the 80’s and early 90’s. The style that had not changed since probably the 70’s is soon to get a facelift from the time the comics for this trade were published. It would have been nice if they only used a single artist for this trade, or at least used artists with similar styles. After the Family Man storyline, the art takes on a darker, harder to look at style. While this works with the writing, it’s not easy to look at and afforded me more time to set this trade down.
One of the last storylines in the trade deals with the spirit of a former inspector who has inhabited the body of a dog. This dog takes over a pack of (what I guess) stray dogs and they live in a salvage yard. How the main dog, Drummond, can actually speak is beyond me. If the reason was stated in this trade very openly, then I guess I must have missed it in the British accented dialogue that bogs this trade down.
The saving grace for this trade is that though the minor storylines lack in dialogue and art, the majority of this trade has a well thought out storyline that is actually engaging.  The precursor to the main storyline is intriguing and gives you a little taste of what could be coming from Vertigo in the form of the Fables series. The entire Family Man story kept me in a near constant state of anticipation. I could envision a similar serial killer on the streets of modern day America, or England. Jamie Delano did a great job scripting the plot for this story, even if the dialogue is sometimes lost.
If you’re already a Hellblazer fan, I think you may enjoy this trade. I don’t think it was the best one to start my readings into the life of John Constantine, but I will press on. My biggest wish for this series is that instead of publishing the trades as separate books, I would have appreciated if they would have published them as sequential volumes in a series so I know in which order to read them. Right now, I’m just looking at the indicia to figure out which book should be read in what order.
Posted by John "Zanziber" Rogers at 6:00 AM
Email ThisBlogThis!Share to TwitterShare to FacebookShare to Pinterest
Labels: Reviews