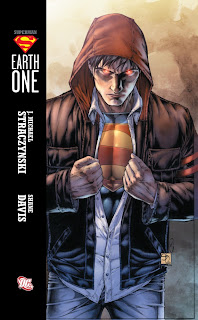 From the creative mind that brought us Babylon 5, we have the retelling of the age-old tale of a dying planet, and their one hope for continued existence. A child sent to live away from its family. Born of one world, but raised in another.

With many series reboots over the years that have been successful and not (the new Batman movies, Marvel's Ultimate universe, etc) I guess it was time for a new version of Superman. I do like the idea of Clark Kent being a fresh out of Smallville Junior College, looking for a job in the "big city" of Metropolis. The cover of this trade seems to indicate a power within him, eager to be let out. So many years of having to keep it secret from the world.

The art was good for this story. I wish that the story hadn't been so epic, but I understand why it was. This is the world's introduction to Superman, so it has to be big. How about we throw in a race of aliens from a planet that used to go to war with Krypton? And they want to kill Superman since he's the last remaining Kryptonian. Sounds like a good enough story.

What I like the most is that the classic story is now brought to the modern day. Sure, Clark was still raised on a farm in Smallville, but there are cell phones, digital cameras and the internet. Welcome to the 21st century Superman.

When I saw that Amazon had sold out of this trade only days after the initial release, I decided I had to get a copy and find out if it was worth it. I found that the local Borders had several, so I picked it up and gave it a read. It's not too bad. It's a good start, but I don't know if DC has decided to have Straczynski write more books for this series, or if it's just a one-shot.

Either way, I think it's worth picking-up and reading at least once. It will linger in my collection, and I will probably never read it again... but it was worth the initial read.
Posted by John "Zanziber" Rogers at 6:00 AM
Email ThisBlogThis!Share to TwitterShare to FacebookShare to Pinterest
Labels: #ThrowbackThursdays, Reviews