Preacher: Until the End of the World 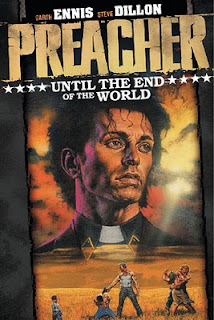 Title: Preacher: Until the End of the World

Here we have another installment of the Preacher series. This trade gives you a great deal of insight into Jesse Custer's background. What drove him to become a preacher? What was his childhood like? What about his parents?
It all goes back to a little place called Angelville. Sounds like a nice place, huh? When you first drive up to the large house with the burning crosses out front, then you begin to realize that the name may be a bit of a misnomer. This place is all about religion, but they are hard-line about it. Led by Jesse's Grandmother, Miss Marie L'angell, you have only ever seen a more sick and twisted bunch of people in a Rob Zombie movie.

The 2 primary antagonists from Custer's past are Jody and T.C. Jody seems to be the sadist of the two, beating the hell out of Jesse at every turn, and afraid to not kill. There's even a scene where a young Jesse Custer tries to fight Jody, only to get his ass handed to him, his arm broken, and then punished for being vulgar by being trapped in a coffin underwater for two weeks. T.C. seems to be a product of inbreeding with farm animals. He enjoys the carnal company of various things, including a little "romantic" interlude with a chicken in the barn. This trade has prooved to me that Garth Ennis has a sick mind.

Through all the strangeness and horrible acts of violence and cruelty, God actually seems to make an appearance in this trade. You'll be surprised why he makes his appearance and the impression he leaves behind.

The next part of this trade brings Jesse and Tulip back to Cassidy in San Francisco. Good times until they find out that Cassidy's girlfriend died of a drug overdose and they all go to find the pricks that gave her the heroin. Enter Jésus DeSade and the Grail... separately, of course. The Grail is looking for Jesse, and the drugs lead directly to Jésus. Just to give you an idea, Jésus is the leader of a group called the Gomorrah People. Needless to say, there is debauchery all over the end part of this trade.

Add this trade to you collection, and keep reading this series. I look forward to going through the next several volumes of this series, and I'll be sad when it's over.
Posted by John "Zanziber" Rogers at 6:00 AM
Email ThisBlogThis!Share to TwitterShare to FacebookShare to Pinterest
Labels: Reviews