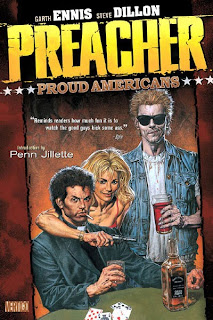 The beginning of this trade finds Jesse learning about his father in the days of the Vietnam war, and we learn where the "Fuck Communism" Zippo came from. It's interesting to see how much like his father Jesse is. This is a great story before getting into the meat of this trade, which revolves around Jesse going into the heart of the Grail and rescuing Cassidy.

We learn a great deal about both Cassidy and Starr. We see how much punishment and death Cassidy can go through, and still stay alive. With Starr, we get an understanding on how he's changed since his time in San Francisco. And we also get to meet the Grail's Allfather and the progeny of the sacred bloodline. Who knew that inbreeding the holy bloodline would have such dramatic effects on the descendant of Jesus Christ? It also looks like this group of Christians may also have an affection for Buddha. (You'll get this joke once you've read this trade.)

It's really amazing to see what Cassidy can actually live through. Being shot several times, dismembered and blown apart by a grenade and he still lives on. After getting his manhood shot off, I don't think he'd want to live much longer. It's a good thing they didn't decide to just toss him outside at noon.

I shouldn't forget that the Saint of Killers makes an appearance or two in this trade as well. If it weren't for the Saint, Jesse probably wouldn't have survived very long. And he probably wouldn't have learned a ton about Genesis. Oh... did I fail to mention that the Grail actually had Genesis' "father" (who was cast down from Heaven) locked-up in their prison? Guess that must've slipped my mind.

Another great addition to your collection, and a continuation of the Preacher series. As they say about Pokémon, "Gotta catch them all!" Every volume of this series should be a foundation to you graphic novel/trade paperback collection.
Posted by John "Zanziber" Rogers at 6:00 AM
Email ThisBlogThis!Share to TwitterShare to FacebookShare to Pinterest
Labels: Reviews