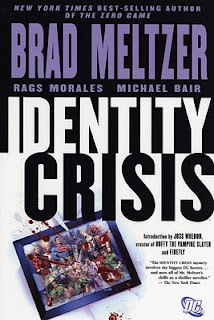 Comic books have really evolved since the golden age. Does anyone remember the Comics Code Authority (CCA)? Back in the days when violence and sexual innuendo was restricted, this story would have never been published. Then again, I think the same could be said for about 90% of the comics currently being published.

This was my introduction to Brad Meltzer's writing. To say the least, I am a fan. He lured me into the DC Universe, got me up-to-speed, and fascinated me with this storyline. The big question this trade poses is "What happens when the 'bad guys' learn the secret identities of the 'good guys' and start taking it out on their families?" Another good question Brad poses is "Where do superheroes draw the line?"

This trade is an excellent read of fiction, and an interesting study in psychology. How far do superheroes allow ethics and morality to be bent before they become the very villains they combat? Where is the line drawn? For people like Batman, there has always been a large gray area of morality. On the other hand, Superman fights for "truth, justice, and the American way." What happens when a small group of heroes from the Justice League cross the line and keep it secret from the rest? What usually happens when anyone tells a lie? Sooner or later, the lie is discovered.

The entire superhero community is so focused to find the person who committed a horrible act of murder against one of their own; they don't think to look to themselves as possible suspects. They act well as a team, but they don't think well together. It doesn't help that those who are covering their secret help to form the teams to hunt down suspects. The end of this story and the reveal of the real culprit will shock you.

As I said, this is a great work of fiction and psychology. Meltzer did his homework before he wrote this fine piece of work. Rags Morales' art is a fine compliment to Meltzer's writing to combine and create one hell of a trade. Add this one to your expanding collection as I have. I have already read this trade twice, and it has been a great read each time without any disappointment.
Posted by John "Zanziber" Rogers at 6:00 AM
Email ThisBlogThis!Share to TwitterShare to FacebookShare to Pinterest
Labels: #ThrowbackThursdays, Reviews