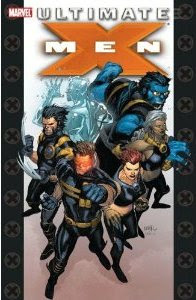 As I mentioned when I wrote my review for the Ultimate Spider-Man trades, I came to the "ultimate" Marvel universe late in the game. I feel fortunate that I can catch-up on what I've missed through trade paperbacks. Had I known that this series was going to be as good as this singular trade was, I would have collected the entire series from the start.

Mark Millar and Geoff Johns have taken the classic X-Men, and retooled them for the next generation (no pun intended) by putting the young team in the modern era with modern problems. As much as I'm a fan of the original team of X-Men, plus several of their various off-shoots (X-Force & X-Factor), I have now become a fan of this re-imagined team of mutant superheroes.

We start with Jean working to recruit new members to Xavier's School for Gifted Youngsters. The line-up for recruitment include Henry "Hank" McCoy, Piotr "Peter" Rasputin, Robert "Bobby" Drake and Ororo Munroe... better known as Beast, Colossus, Iceman and Storm. They soon receive help from a curious source who is only known as Wolverine. What they don't know at first is that Wolverine was actually sent to kill Xavier. Do you think he gets the job done?

The major problem for the young team of mutants at the beginning of this trade is the government and their Sentinel project. The classic X-enemies are brought to the 21st century, and they have superior mutant detecting capabilities. It takes an abduction, rescue and then saving the president and Washington D.C. to finally put a halt to the robotic army... but at what cost?

Once they've dealt with the Sentinels, the next roadblock is from a little known agency, funded by the government, called Weapon X. They've abducted mutants from all over the world and "trained" them to work for them. Their "training" consisting of torture, abuse, threats and explosive devices attached to their heads. They even take the whole team and bend them to their ways. Imagine the X-Men as members of Weapon X. Guess who comes to save the day?

With great writing and the excellent artistic skills of the Kubert brothers, this trade is well worth adding to your collection. I'm looking forward to picking-up volume 2. They have me hooked, and I know that down the line Brian Michael Bendis takes-up the writing mantle for this title.
Posted by John "Zanziber" Rogers at 11:28 AM
Email ThisBlogThis!Share to TwitterShare to FacebookShare to Pinterest
Labels: Reviews