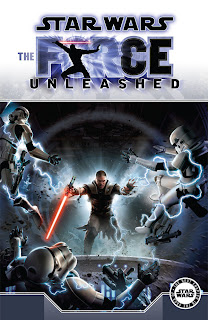 After playing this game on my X Box 360, and also being a big fan of most anything Star Wars, I felt compelled to read this graphic novel. I was not disappointed, and with the sequel game coming out soon, I would recommend reading this and playing the game before you get the new release.


The story follows the same lines from the game, except that it is from the point of view of Proxy; Starkiller's training droid. He recounts the events of Starkiller's life until he is disabled on Corellia after Vader's attack. The story is well written and gave me several ideas for running a Star Wars RPG game. I love the idea of Vader taking on a secret apprentice, and then the entire idea was Emperor Palpatine's plan all along to find out who the main opponents to the empire are.

The action in this graphic novel and the video game are spectacular, and this is a good read for any Star wars fan. The art fits well with the story and allows you to step back into the Star Wars universe while you read.

My only problem with this book was that the cover separated from the rest of the book at the spine when I opened it for the first time. This is apparently an issue that Dark Horse has with many Star Wars books, because the same thing happened to me when I bought brand new copies of some of the Star Wars: Infinities trades. As posted previously, once I commented to Dark Horse the problem I had with this particular book, they were quick to respond for my shipping address to send me an undamaged copy. Kudos to Dark Horse, but ultimately they should probably get a better binding process/system so this doesn't happen again.
Posted by John "Zanziber" Rogers at 6:00 AM
Email ThisBlogThis!Share to TwitterShare to FacebookShare to Pinterest
Labels: Reviews