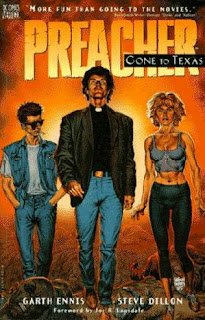 When I had to sell some of my graphic novel and trade paperback collection, the Preacher series was one of the hardest to sell. I was able to re-create my collection of Sandman, but I'm still working on this series. I decided to pick this trade up to read for review, and I realized how much I love the work of Garth Ennis.

Before I became a huge Bendis fan, I followed Ennis with a passion that could easily be called fanaticism. I read everything I could find with his name associated with it. In my eyes, he could do no wrong. He gives me a much needed diversion from superheroes, mutants and mecha. His writing reminds me of why DC created Vertigo, and why I love it so much.
The recipe for this series is as follows:
In this trade, we have the small beginnings of the entire series. We find out how Jesse, Tulip and Cassidy found each other. We also get a glimpse inside of Jesse's mind as he converses with John Wayne. Don't forget the Saint of Killers who has been tasked to send Genesis back to Heaven. And the there's Arseface. You have to read this trade in order to really appreciate this series. Pick it up and add this to your growing collection of graphic novels and trade paperbacks.
Posted by John "Zanziber" Rogers at 6:00 AM
Email ThisBlogThis!Share to TwitterShare to FacebookShare to Pinterest
Labels: Reviews