Cinderella: From Fabletown with Love 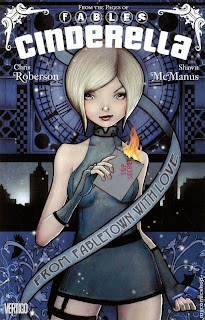 Title: Cinderella: From Fabletown with Love

Oh how I love the Fables series and this trade is no different. It may not have been written by Bill Willingham, but Chris Roberson captures the essence of Cinderella beautifully in this work. It definitely satisfied my desire for more Fables since I still have a few months before volume 14 becomes available.

As devoted followers of this series know, Cinderella is one of Fabletown's secret tourists; a spy network originally setup by Bigby and now run by the current sheriff, Beast. Mild mannered (opinion) shoe store owner by day, super spy by night.

Cinderella's mission is to find out who has been trafficking in magic items to the mundy's. Oddly enough, her mission takes her to the Middle East and she runs into Aladdin and they work the mission together. Soon enough, they find out that the picture is larger than imagined. While magic weapon's are coming into the mundy world, mundy weapons are headed back to the Homelands.

After this revelation, Cindy and Aladdin head through the portal where the weapons were headed, and arrive at Ultima Thule. This region of the Homelands has daylight for 6 months, and night for 6 months. There's a law against frowning and non-licensed magical items. Who is behind this insidious land? You'll have to read this trade to find out.

While Cinderella's away, someone has to run the shoe store. Enter Crispin Cordwainer. He's been working there forever, and doesn't feel that he receives the respect that he deserves. While Cindy's gone, Crispin decides to place an order for some new shoes to be made. Unfortunately, these new designs are not well received.

As with all the rest of the Fables series, add this trade to your collection.
Posted by John "Zanziber" Rogers at 6:00 AM
Email ThisBlogThis!Share to TwitterShare to FacebookShare to Pinterest
Labels: Reviews