Spike: After the Fall 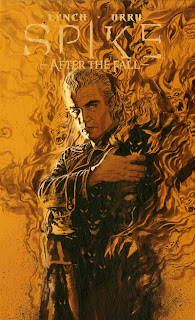 Title: Spike: After the Fall

Those of you who have been following/reading my reviews have already seen those that I've posted for Angel: After the Fall series. Now it's time to see what happened with our bloody British friend, Spike. Just as with the Angel series, this starts off soon after L.A. went to hell and Spike has gone his seperate road from Angel.

Our hero gains a following on humans that have been able to survive the onslaught of being sent to Hell. In true Spike fashion, he can't get the name of his closest follower right. This makes for a few laughs throughout this trade. In no time, Spike is taken prisoner by one of the self proclaimed lords of Los Angeles named Non. He also manages to get Illyria/Fred captured as well as she's having a hard time focusing between God and human. After being tortured by demons and working hard to make Illyria stable, Spike becomes the new lord of of Beverly Hills with the help of Connor.

There's not much to say about the story for this trade. It's a good read with comperable artwork, and it ties in perfectly for when they introduce Spike and Illyria in the Angel series. Nice addition to the collection and to the Angel series. You could read this before the Angel trades or after, works well either way.
Posted by John "Zanziber" Rogers at 10:18 AM
Email ThisBlogThis!Share to TwitterShare to FacebookShare to Pinterest
Labels: Reviews