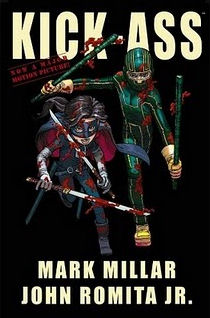 The entire premise of this trade: What if regular people became superheroes? Dave "Kick Ass" Lizewski is your average teenager with normal teenage problems. To spice-up his life, he decides to become a real life superhero like from one of his comic books. His first attempt at crime fighting, epic failure as he's beaten, stabbed and left for dead after being hit by a car. Does that really stop him? The trade and movie would both be very boring if it had.

Being in an published, illustrated format, the trade had a lot more blood and profanity to offer than the movie could. I'm sure that if the movie had as much gore, sex and cursing as this trade does, they would probably have received an NC-17 rating. Thank goodness that the screenplay made it to the big screen or many of us would have missed this entirely.

From kids playing dress-up superhero, to a guy who uses his comic book collection to give his little girl a fun life, this trade has everything you want. I hear that there have now been some talks about making a sequel: "Kick Ass 2: Balls to the Wall". I hope it doesn't get screwed-up like so many sequels have. Keep your principle actors, and don't make the script too outlandish so that fans of the original will still love you for what you're doing.

This trade doesn't have nearly the "happy" ending that the movie does, but it's still a great read. Millar knows how to spin a tale, and JR, Jr's art is a fine compliment to it. Add this one to your collection, and look forward to a companion in the coming years.
Posted by John "Zanziber" Rogers at 6:50 AM
Email ThisBlogThis!Share to TwitterShare to FacebookShare to Pinterest
Labels: Reviews