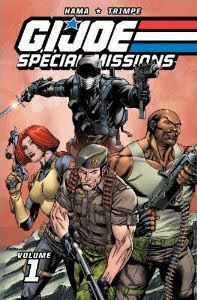 In the introduction for this trade, Mark Bellomo (assistant editor) writes about the reasons for Marvel deciding to publish a new G.I. Joe series. G.I. Joe was hugely popular at the time, with a successful cartoon/comic book series and toy line, Marvel and Hasbro decided that Larry Hama  could work on something that wasn't primarily driven by the sales market.

These missions are "so secret, so sensitive that even the Joes who go on them are told only the bare minimum, on a strictly need-to-know basis." Many of these missions weren't Cobra centric, they were based in "real world" issues such as hi-jacked planes, terrorist plots and cold war politics. The stories can still be a little outlandish, but more realistic. People actually die in this series. This is still very tame in comparison to what gets published these days.

I remember when this series original came out in the 80's. I even had a subscription for a short time. I recall not being too enthralled by this series. Possibly because as a child I preferred the "glitz and glamor" of seeing new toys and figures that the original ongoing series provided. I was a slave of the Marvel/Hasbro brainwashing as I not only followed the comic series, but also the cartoon and toy line.

As stated in my previous reviews, Larry Hama has a great talent for writing. I enjoy how he captures each individuals personalities in the dialogue. It does help that Hama has the support of some very talented artists to illustrate his work. Herb Trimpe gets the job done for him in this series. Now, as an adult, I can appreciate these stories a little better and I look forward to the next volume. Thank you again IDW for reprinting the classic G.I. Joe series.

Add this to your collection and keep your eyes out for the next volume.
Posted by John "Zanziber" Rogers at 1:18 AM
Email ThisBlogThis!Share to TwitterShare to FacebookShare to Pinterest
Labels: #ThrowbackThursdays, Reviews