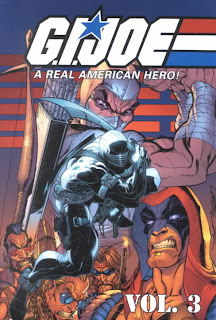 Yet another throwback to my childhood, this is actually one of the few original Marvel trades from the G.I. Joe line that I have acquired since IDW took over. The real difference is that at the end of each issue, they've reprinted a page from the G.I. Joe: Order of Battle series depicting a character's dossier.

This trade starts off with the famous "Silent Issue". Arguably the greatest Joe story ever told. Written and drawn by Larry Hama, but without a word in it. Various comic book writers have said that they received inspiration from this issue. It is this issue where we first meet Storm Shadow and get the foreshadowing of his relation to Snake Eyes.

This trade also features the introduction of Zartan and the Dreadnoks. One of my favorite action figures from the G.I. Joe line was Zartan, with his color changing skin and his "master of disguise" mask. The Dreadnoks have got to be the most disorderly bunch or guys you will ever meet. With their fondness of grape soda and chocolate doughnuts, I'm surprised they have most of their teeth.

We also have the first telling of Snake Eyes origins in this trade. Any fan of Snake Eyes should include this into their collection. Any fan of G.I. Joe will already have this trade in theirs. I had a hard time putting this particular trade down. Once I came close to the end of this trade, I had to go online and find volume 4.
Posted by John "Zanziber" Rogers at 9:29 AM
Email ThisBlogThis!Share to TwitterShare to FacebookShare to Pinterest
Labels: Reviews