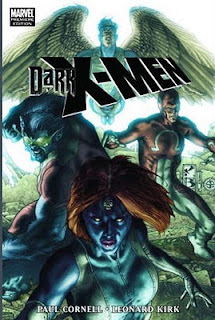 Norman Osborn has created a set of Avengers, it's an evolutionary step to create his own team of X-Men as well. What a hodgepodge group of mutants. Led by Mystique, you have Dark Beast (a reject from the Age of Apocalypse storyline), Mimic (a throwback to the X-Men from many years ago) and Weapon Omega (the necessary Canadian element on any mutant team).

This storyline begins when a group of regular humans start walking around in a trance all saying "I am an X-Man." Odd behavior, and with the recent mutant issues, of course Osborn send his X-Men to investigate. They find out that it happens to be Nate Grey (also another reject from the Age of Apocalypse), who had been once believed to be dead. He's stuck in a pure energy form and has been trying to pull himself back together. The X-Men find out about Nate when they find another project Osborn has put together, combining several psychic's to form one cohesive unit.

When recent events come to Nate's attention (specifically Civil War, Secret Invasion as well as Dark Reign), he is very upset and plans to do something about it. Enter the Dark Avengers to help take him down a peg for Osborn's plan to use Nate to power the Omega Machine. Unfortunately, Nate has other plans that don't involve him being held prisoner. To prevent this from happening, Nate goes somewhere I think nobody would ever intentionally want to go; Norman Osborn's mind.

With Nate taking control of Norman's body, it's Mystique and the rest of the X-Men to save the day... by being projected into Osborn's mind. Do you think that Norman and the Green Goblin can overpower Nate Grey? Will Norman or the X-Men be the same after this encounter in Osborn's mind?

Interesting storyline and pretty good art help keep your attention in this trade. I don't think it adds much to the Dark Reign storyline, but it's a good read. What's going to happen to this team of X-Men after Norman's been brought down? I hope to find out.
Posted by John "Zanziber" Rogers at 9:18 AM
Email ThisBlogThis!Share to TwitterShare to FacebookShare to Pinterest
Labels: Reviews