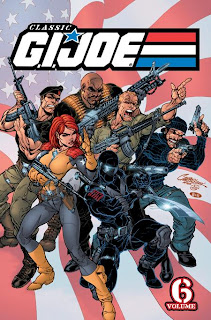 We begin this trade in the aftermath of the attack on Springfield. The Dreadnoks have made a run for the swamp, and they've stumbled upon Zartan's brother and sister. A family of shapeshifters, masters of disguise and thieves... what could be better? The entire lot of them break Zartan out of the Pit from underneath the noses of the Joes, including the latest addition; Sgt. Slaughter.

We also find the invasion and destruction of the Pit by Cobra. They send an entire army of Battle Android Troopers (B.A.T.s) down the main elevator shaft to begin the assault. The funny thing is that the entire G.I. Joe team has been suspended and forced to leave the Pit. The only people that are down there during the attack by Cobra are Hawk and the council from the Pentagon that oversee the operation of G.I. Joe. They manage to hold them off until they are able to bring the entire pit down on the Cobra force, which happen to include Cobra Commander and Destro.

We find out that it takes more than a large underground building falling on top of them to kill Cobra Commander and Destro.Cobra Commander ends up finding a comatose Billy and takes him to Denver to get help, while Destro goes home and finds that an impostor has been working to acquire the secret plans for Cobra's Terror Drome.With all the people that Cobra has available to disguise themselves as Destro, you'll never guess who actually was picked to wear the beryllium steel mask of the McCullen family. Cobra Commander also receives a new look in the form of his battle armor, built by Fred VII of the Crimson Guard.

A great continuation of the old Marvel series, this is a must own for the collection. When the original series was being published, I had a subscription. I still have those issues in my collection and I'm working on completing the entire Marvel series. I'm happy that IDW has asked Larry Hama to write the continuation of the original series. I was very happy when I saw that they were offering G.I. Joe: A Real American Hero #155 1/2 for Free Comic Book Day 2010. Since that day, I have added the title to my subscription list at my LCS; Tony's Kingdom of Comics.
Posted by John "Zanziber" Rogers at 7:33 PM
Email ThisBlogThis!Share to TwitterShare to FacebookShare to Pinterest
Labels: Reviews