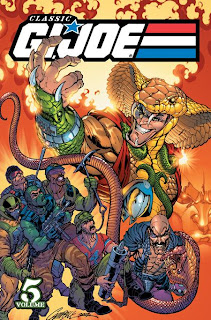 These are the issues that started it all off for me. One day, when I was sick as a child, I asked my father if he could pick up the latest MAD magazine for me to read. Upon returning from the store, he told me that they didn't have any copies of MAD, but he did buy me a copy of G.I. Joe: A Real American Hero #50 from Marvel Comics. Thus began my obsession with collecting comic books.

In this particular trade, we begin with the aftermath from volume 4... namely the creation of Cobra Island. Obviously, this creates several problems for the Joes. The biggest issue with Cobra Island is the fact that they become a "legitimate" sovereign land off the coast of the United States. Imagine, a huge island off of the southern coast of the USA that houses some of the world's most terrible terrorists. You can tell that these were written during the Cold War era.

Throughout this trade, we find stories that include-
The final two main stories that complete this trade involve Rip Cord dropping in on Cobra Island to find out if his girlfriend Candy is really a Cobra agent or not, and the creation of Serpentor. We close this trade with the attack of the entire G.I. Joe team on Springfield; "A Nice Little Town". This creates some headaches for the Joes in the next volume. I suggest you read on to find out more.
Posted by John "Zanziber" Rogers at 8:34 PM
Email ThisBlogThis!Share to TwitterShare to FacebookShare to Pinterest
Labels: Reviews