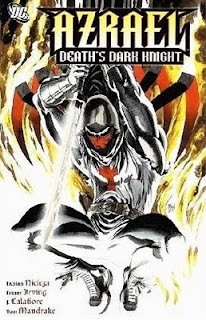 I became a fan of the original Azrael, Jean-Paul Valley, while I was sucked into the Batman world when Bruce Wayne was getting his back broken by Bane. One I got a glimpse of who Jean-Paul/Azrael was in the Knightfall storyline, I wanted more. That's when I decided to pick-up the Sword of Azrael trade and read more. Thank you to Joe Quesada and Dennis O'Neal for creating such an interesting character.

At the time of this trade, Jean-Paul has been dead for several years, and Azrael has been dormant. With Batman presumably out of the picture, the Order of Purity decides to find a new Azrael to help bring Gotham back from the brink. They find their man in the form of an ex-cop who was being groomed as a replacement to Batman for just such a day. With the Suit of Sorrows and the Sword of Sin, Michael Washington Lane becomes the latest incarnation of Azrael and he proclaims himself "The Dark Knight of God".

I've always loved Fabian Nicieza's writing from the first time I read his work on X-Force. I actually had the pleasure of meeting and talking with Nicieza many years ago when he came to the Portland Comic Book Show; really nice and fairly laid back. Those were the days when the autograph's were $0.25 each and that would go to some wonderful charity. They also had big names like Nicieza and John Romita Jr. attending for the cause. Wish they would go back to that.

The art in the first part of this trade isn't the greatest. It's not incredibly horrible; I just like the art from the annuals rather than the actual series. Sorry to Frazer Irving, but I don't like your artistic style. If it weren't for Nicieza's writing, I probably would have put this trade down and not picked it back up.

This is a good tie-in with the Battle for the Cowl storyline, and I would recommend it for any Bat-fan and especially for those Azrael fan's out there.
Posted by John "Zanziber" Rogers at 1:59 PM
Email ThisBlogThis!Share to TwitterShare to FacebookShare to Pinterest
Labels: #ThrowbackThursdays, Reviews