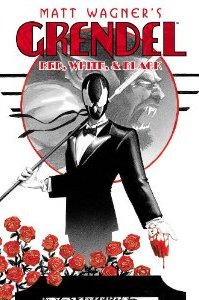 I've been a fan of Matt Wanger for many years, being drawn to him initially because of Grendel. I just love the concept and the costume design. I know that when Wagner originally published Grendel with Comico, they were very low budget and only printed color on their covers. I'm not sure if this was the reason behind the simple colors for Grendel's costume, but it works very well. The cover of this trade is one of my favorite pictures of Hunter Rose as Grendel. The red of the roses and blood exemplify the simple black & white of the mask and tuxedo.

I remember actually having the fortune of meeting with Matt Wagner at one of the Portland Comic Book shows in Oregon many years ago; mid to late 90's. Much like every artist/writer I've ever spoken to, Wagner seemed like a very down-to-earth kind of guy. He knew that the multitudes of fanboys that were in line waiting to get his autograph on the many comic books they brought from far-and-wide, he didn't let that get to his head. We spoke about Grendel, his future work and (of course) I gushed a bit about being a fan of his.

This trade is a several stories written by Wagner and illustrated by various people. There are a few pieces that I feel the art could have been better to help the story. The different styles of art sometimes made it hard to stay interested in the story. I do enjoy that throughout the trade, red was used as an accent color to emphasize the black and white art. I prefered the more "traditional" art styles as opposed to the divergent styles depicted in the stories "Devil's Dash", "Devil's Karma" and "Devilish Escapades".

If you're not familiar with Grendel, I would suggest finding another trade to start with. This is a good book for someone who is a fan or just has a passing familiarity with the character.
Posted by John "Zanziber" Rogers at 11:20 AM
Email ThisBlogThis!Share to TwitterShare to FacebookShare to Pinterest
Labels: #ThrowbackThursdays, Reviews