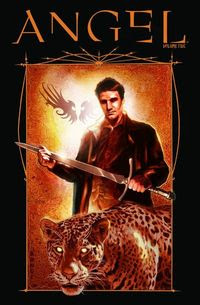 Los Angeles is back from Hell. Angel has a new team starting with a friend from the past. Everyone else seems to have gone their own ways. Gunn is in the hospital. Wesley is still dead. Lorne is watching over Gunn. Spike is gone and being Spike. And Illyria is watching over the comatose Gunn to make sure he doesn't get killed. Sounds like a typical Angel scenario, doesn't it?

This is not the old Angel Investigations. Not by a long shot.

Angel is the savior of L.A. and has a hard time finding serious work, at first. Then, along comes a pair from the government who offer Angel a contract to lead a "committee to handle the apocalyptic fall-out". The apocalypse may have been averted, but everyone still remembers what happened while L.A. was in Hell. Another fun fact is that Wolfram & Hart are no longer in L.A., and apparently never have been.

And then along came James and Desdemona. One is an actual angel trapped on Earth trying to find his brothers and figure out why they can't return to Heaven. Desdemona (Dez) is a jaguar that was turned human that is trying to revert other animals-turned-people back to their normal selves, though she's struggling to keep herself from going back to her native form.

It's one thing when Angel and company were going up against demons, but here they are going up against angels; a little too much for my taste. I feel that they're really working hard to find storylines for this series, and it's going downhill rapidly. The art is consistent throughout, which helps keep some interest in this trade. The best part would have to be the cover gallery at the end.

If you're a fan of this series, you may not like the direction this is taking.
Posted by John "Zanziber" Rogers at 11:06 AM
Email ThisBlogThis!Share to TwitterShare to FacebookShare to Pinterest
Labels: Reviews