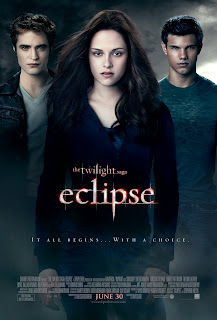 As I have written before in my review of Twilight: The Graphic Novel Volume 1, I was not a fan or the first Twilight movie, but I did enjoy New Moon. The previews for Eclipse got me very hopeful that the story would tear away from the angsty teen romance to the vampire versus werewolf. I’m a sucker for some good CGI, and there was some good graphic in this movie.

While I was still not a big fan of the entire storyline, this movie had several action sequences that kept me interested. The fact that when vampires hit other vampires they would break like a statue, that was cool to watch. Seeing half of someone’s face get knocked off and not a drop of blood was spilt, very interesting. Vampires attacking and being attacked by huge F’ing wolves… that was what helped to make the movie fun for me.

There were some good one-liners throughout Eclipse as well, such as Edward asking Bella of the approaching Jacob… “Doesn’t he own a shirt?” I‘m sure that every single person in the theatre I was in laughed at this one. And the barbs that Jacob and Edward traded in the tent scene where Jacob was laying next to the sleeping Bella to keep her warm, this scene worked well and kept me laughing.

While I am not entirely invested in these movies, nor do I have strong feelings for the characters, I found myself cringing at the end when Jacob was on the receiving end of a bear hug from a vampire. I could almost feel the pain that the character must have gone through, as I heard bones cracking.

The main things that keep me coming to these movies are thus:

• I’m a sucker for good CGI, and the huge F’ing wolves are fantastic.
• I like vampire and werewolf stories.
• I understand that in the last book, Bella dies. After all the angst she has put me through in these movies, I deserve to watch her die. :)

This is not a standalone movie, so if you go to see it, you’d better have watched both Twilight and New Moon prior. If you don’t and try to see this movie out of sequence, it would be like watching Return of the Jedi before watching (at least) The Empire Strikes Back.
Posted by John "Zanziber" Rogers at 9:32 AM
Email ThisBlogThis!Share to TwitterShare to FacebookShare to Pinterest
Labels: Movies