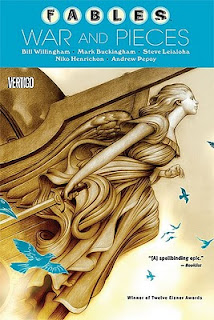 The war in the Homelands continues in this trade. The ending may surprise you after reading the previous 10 volumes, but this one (just like the rest of the series) does not disappoint. This trade is by no means the end of the series, so continue to enjoy.

We begin this trade centering around Boy Blue. He has become an incredibly integral part in the war machine. His story begins with Blue finally deciding to tell Rose Red how he feels about her. This revelation would have been better revealed a few years prior, as it has now lost its meaning and full potential effect. Instead of getting a "Dear John" letter while he was in the thick of war, Blue gets it before leaving. Kind of a suck way to start your new military commission. Boy Blue's part in this war is to transport to-and-from various stations within the Homelands as well as the real world with the assistance of the Witching Cloak.

Prior to the actual start of the war, we have an interlude with Cinderella... the Fable spy with a license to kill. She is tasked to find an return a "special package" from Tierra Del Fuego. Here she is abducted by Hansel after we find that the "package" is actually the wayward Pinocchio. He has returned to not only help the Fables win the war, but he also has a special condition for his assistance. This is one of the surprises that pepper this trade.

You can probably guess how this volume ends, but it's the "how" that keeps you reading from this trade and into the next. The war ends and there are several changes that have been made. The consequences of war are numerous, and will have an effect in the next volume; Fables: The Dark Ages.
Posted by John "Zanziber" Rogers at 8:41 PM
Email ThisBlogThis!Share to TwitterShare to FacebookShare to Pinterest
Labels: Reviews