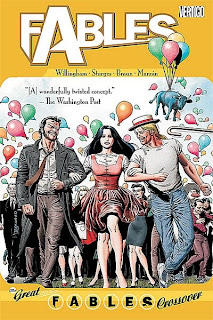 The last time we saw Jack in the Fables was in Fables: Sons of the Empire when he was trying to steal from Santa Claus. Now, he's back and he has a following. If I were to have read the Jack of Fables series, I think I would have been able to get into his part of this trade a little better. It all came together in the end and continued the legacy of fine trades in this series. It pains me that I have to wait so long to read the next volume.

Jack has a large following consisting of individuals known as Literals. You would have to read the Jack of Fables series to understand exactly what a Literal was, as they do not provide a clear definition in this trade. Everyone is working to stop one specific Literal who seems to have his sights set on rewriting/resetting the world. Kevin Thorne is his name, and he's very unhappy with how the Fables have changed their lives. The only reason it seems to take him so long is because he doesn't recognize that his twin brother, Writer's Block.

The Literals at Thorne's side are incarnations of their various genre's: Sci-Fi, Mystery, Comedy, Fantasy, Literature, Horror, Western, Blockbuster, Romance and Noir. To try to illustrate, imagine a stereotypical character from each of these genre's, and there you have the Literal for it. Interesting concept, but I do wish I didn't have to have read the Jack series to get a better understanding of them.

As Snow White and Bigby make their way to stop Thorne, Bigby goes through several changes thanks to the aforementioned Literal. From monkey to donkey to elephant to cartoon circus elephant to the final incarnation of a little girl. The best scene in this entire trade is when Bigby sneak's behind enemy lines before they get to Thorne and takes out the entire opposing Literal force. Go Team Bigby!

Meanwhile... back at the Farm... trouble is brewing as Jack Horner arrives to reclaim his old girlfriend, Rose Red. She's still in a funk over losing Boy Blue and what she told her before he died. In her depression, she thinks that Jack is actually Blue and through this, the animal Fables who believe that Boy Blue will return and be their savior believe that Jack is actually the reincarnated Blue in disguise. Needless to say, wherever Jack goes, trouble follows close behind. Did I happen to mention that Jack's son comes looking for him? You'll actually have to read this trade to figure that one out.

No more Fables trades until December. I can't wait. This has been one of the best series I have ever read in my life.
Posted by John "Zanziber" Rogers at 10:35 AM
Email ThisBlogThis!Share to TwitterShare to FacebookShare to Pinterest
Labels: Reviews