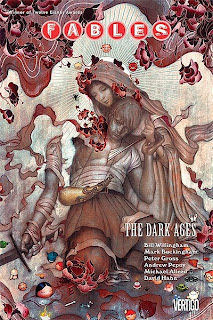 The aftermath of the war is upon the Fables now, and they have to learn to live with the many consequences. There are new residents in the neighborhood, and not everyone is happy about that. This is only the first section of this trade, It goes downhill from that point.

After a day of sightseeing for the newest citizen, the tales turn towards Boy Blue and his struggle with is war wound and a new unknown entity who refers to himself as "Mr. Dark". Boy Blue's injury doesn't seem to be getting better, and you can probably figure out what happens to him by the cover of this trade. Before his struggle comes to an end, the entire cast of Fables in the real world pay homage to their fallen Prince Charming. Because of the revelations from Fables: The Good Prince, it was agreed that nobody will ever be sent down the Witching Well ever again.

"Mr. Dark" was released from a locked box back in the Homelands by a couple of treasure hunters. We later find out that this locked box was one of several around the various lands that helped to power the empire's magic users, much like the box that Geppetto kept the Blue Fairy in. There are several other ill omens that visit our fair Fables, such as the Witching Cloak deteriorating into scraps and an earthquake in New York. To top it all off, after Prince Charming's funeral, various enchantments begin to disappear; the business office and Bluebeard's old apartment are among the more notable enchantments. What happens next changes the face of Fabletown forever.

The Fables are forced to run to the Farm to take up refuge from "Mr. Dark", who has come to Fabletown to reclaim his power; namely the Witching Cloak. Once he arrives at the unpopulated Fabletown, "Mr. Dark" starts to make himself at home. He enlists the help of the dead to begin construction of his new castle. It looks as though he is expecting to stay for the long term.

Boy Blue's final days are filled with final visits from many of the Fables, the last of which happens to be Rose Red. In her visit, Red comes clean about her true feelings for Blue. After a very stirring speech, Blue informs her that he deserves better than her because she jumps from "hero" to "hero" at the drop of a hat. This new revelation sends Rose Red into a deep depression, which extends into the next volume; Fables: The Great Fables Crossover.

At the end of this trade, we have a story featuring Mowgli who is sent back to his Homeland to get a feel for what's going on there after the fall of the Empire. Bagheera and Bigby's 6 brothers go with Mowgli to check on things. In the end, the brothers confuse the remaining goblins and begin to reclaim the land. Good story.

Another addition to the collection. Buy it. Read it. Keep it.
Posted by John "Zanziber" Rogers at 8:35 PM
Email ThisBlogThis!Share to TwitterShare to FacebookShare to Pinterest
Labels: Reviews