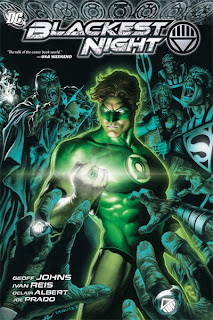 I have never been a huge fan of any of the DC titles, but I do occasionally pick up something that interests me or one of the various epic crossover storylines; such as Blackest Night, Identity Crisis, Final Crisis, etc. Thus far, my findings with DC trades have been hit-and-miss over the years. There have been some that you can't just pick-up and read without having a firm grip on the back-story, while others run the gamut between good and pathetic. I'm happy to say that Blackest Night has renewed my interest in the DC Universe... for the time being. So far I have only read this single trade, but I have added the companion Blackest Night trades to my Amazon wish list for future purchase potential.

As much as my interest with DC was hit-and-miss, I never really read much Green Lantern material. I understand the concept, and it's good. I think it's a little too complicated for me to get into at this late point in the game. If Geoff Johns was the writer for a rebooted series (such as what Marvel did with the "Ultimate" line), I would seriously consider adding it to my current subscription pulls for my collection.

Johns never lost a beat in his writing. I was able to keep track of the story throughout the entire trade, unlike my experience reading Final Crisis. Maybe if I re-read Final Crisis, I may have a better time with it. Perhaps I'll give it a shot once I've exhausted my collection of other books to read. Johns kept me interested and focused. I think that the only times I put this book down were between chapters.

Ivan Reis did a great job with the pencils in this trade as well. The characters really came alive for me, and I was never confused about what exactly was going on in the panel or page. There have been times in other DC trades where the art has been so disconnected that I'm not sure where the progression is. Thank you so much for the great work you've done on this to both Geoff Johns and Ivan Reis.

Consider this DC's response to all of Marvel's Zombie trades... but not so campy or silly, and instead of an infection, there's actually a villain behind the actions that rock the DC Universe. Bravo! It's not every day that I will commend DC over Marvel... not that I'm biased, just that Marvel has always had more of my interest than DC has. Perhaps that is beginning to shift.

Get this trade... Read it at least once... Keep it in your collection. You will not be let down by this trade, and I am looking forward to giving the companion trades a thorough reading.
Posted by John "Zanziber" Rogers at 1:18 PM
Email ThisBlogThis!Share to TwitterShare to FacebookShare to Pinterest
Labels: Reviews