Angel: After the Fall Volume 4 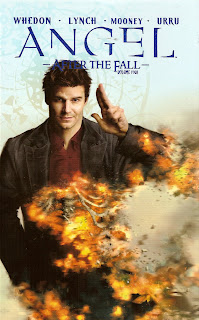 Title: Angel: After the Fall Volume 4

It took my quite a while to get back to reading the Angel series, as I was distracted by so many other colorful trades. I have committed myself to reading the rest of this series before I pick-up anything new to read. I'm in the middle of volume 5 right now, and volume 6 is waiting in the wings. I hope to have this series completed within the next week or two, with reviews of each to follow accordingly.

Now... down to business.

When we left our intrepid heroes, they were still in Hell and it was finally revealed that Angel wasn't a vampire any longer. This trade picks up where volume 3 left off; Angel is mortally wounded and facing imminent death. To top it all off, he’s seeing Cordellia and she’s trying to help him through the process. Since this series has 2 more volumes that come after this trade (at the time of this writing), you can safely assume that Angel returns and does not die… yet.

The rest of this trade revolves around Gunn’s plan to save the world by using Illyria to timeslip back before Los Angeles went to Hell. A good plan, in theory, but anyone who either reads mystery or is a fan of this series knows it won’t work as planned. And because of this, Wolfram & Hart get more directly involved.

Since Gunn’s plan doesn’t work out as well as he would have hoped, Angel has to come in to save the day as any good martyr would. With his sacrifice… after some subtle hints from Wolfram & Hart and some help from Wesley… Angel saves the world again. Or so it would seem.

The end of this trade revolves around the Aftermath (the name of the next volume in the series) of Angel’s sacrifice and the repercussions of sending LA to Hell. Well worth the read.
Posted by John "Zanziber" Rogers at 1:05 PM
Email ThisBlogThis!Share to TwitterShare to FacebookShare to Pinterest
Labels: Reviews