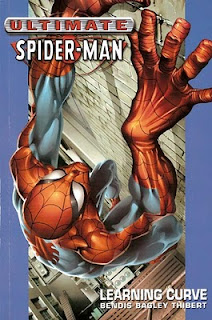 Anywho… we are also treated to Peter’s new job at the Daily Bugle. He brings in pictures of Spider-Man, but walks away as the newspaper’s webmaster. This is a huge leap forward from the original Spider-Man stories. I must say, I like this “Ultimate” universe. I wasn’t sure that I would at first because if a franchise is working, why mess with it. Brian Michael Bendis has proven to me that an updated version of this classic character was worth it. I hope this feeling becomes universal for the other “Ultimate” titles.

The bulk of this trade deals with Peter’s obsession with teach The Kingpin, Wilson Fisk, a lesson. Since most crime in the city (at the very least) doesn’t happen without Fisk’s (alleged) approval, Peter comes to the idea that he is ultimately responsible for Uncle Ben’s death. In this storyline, we are also introduced to the Ultimate version of Electro, which Fisk mistakenly refers to as Electra once. There are also at least a couple of Daredevil references in this trade. I expect a team-up to happen in the future.

After Peter has sent the Kingpin packing for parts unknown, he takes the first big leap for any masked superhero: he lets Mary Jane know his secret. In the original series, it took Peter forever to tell anyone he was Spider-Man. This choice was probably made by raging hormones. I commend Bendis keeping MJ’s famous line, “Face it tiger, you just hit the jackpot.”

As I check the Ultimate Spider-Man wiki, I notice that The Shocker will return, and I also notice a whole army of villains. I am looking forward to seeing the Ultimate incarnations of some of my favorites… namely Venom and Carnage. I’m also seeing references to Spider-Woman (GOOD) and “Ultimate Clone Saga” (NOT SO SURE ABOUT). We’ll see what happens. Add this one to your collection.
Posted by John "Zanziber" Rogers at 2:07 PM
Email ThisBlogThis!Share to TwitterShare to FacebookShare to Pinterest
Labels: #ThrowbackThursdays, Reviews