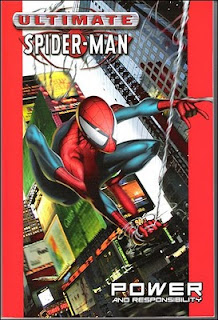 Yes, I know I am very late to read this series. When Marvel first released the “Ultimate” line, I really didn’t pick anything up until very late in the game. Had I known that Bendis was going to be such a great writer, I would have started from the beginning. I guess better late than never.

In this volume, we find the reboot of the Spider-Man series. The “Ultimate” line apparently takes place in a different universe since Marvel kept the main titles running. As much as some things in life need a reboot… like your computer from time-to-time and the Batman movies… I wasn’t sure what to think of these new adaptations of familiar characters. I’ve been a fan of Spider-Man since I was a kid watching the live action television series starring Nicholas Hammond. What could they do to Spider-Man to make it new and exciting?

Well… they did it. This is great to read for long time fans and newbies alike. For a character that has been around since the 60’s, it nice to see an updated and modern take on Peter’s origin story. Cell phones, computers and high-tech science. What a difference almost 40 years makes.

Many key elements stay the same. Uncle Ben, Aunt May, Mary Jane Watson, Flash Thompson, Harry and Norman Osborn. Though the names are unchanged, the stories are vastly different… save that peter is bit by a radioactive spider.

In this volume, the main stories are Spider-Man’s origin, Peter learning how to control his new abilities, and the first appearance of the Green Goblin. Norman Osborn is not a costumed villain in the traditional or the Power Ranger goblin suit. He’s been physically changed into the Goblin. Instead of pumpkin bombs, this new Goblin throws fire.

I would recommend adding this to your collection. It’s a good read, and I look forward to following future volumes. I’ve already read volume 2, and will post a review on it soon.
Posted by John "Zanziber" Rogers at 9:25 AM
Email ThisBlogThis!Share to TwitterShare to FacebookShare to Pinterest
Labels: Reviews