Spider-Man: Back in Black 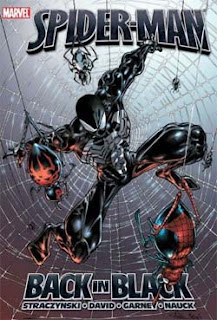 Title: Spider-Man: Back in Black

At the end of the Civil War, and Spider-Man's identity had been revealed to the world, someone made an attempt on his life. The problem is that his spider-sense allowed him to get out of the way of the assassin's bullet. Unfortunately, Aunt May was not as quick. This send Peter into a funk that he's never seen before as he dons the black suit he had forsaken so many years ago.

The symbolism of the black suit provides a great backdrop to Peter's mood as he does anything within his power to find the person behind the assassination attempt. This investigation eventually leads him to the incarcerated Wilson Fisk, aka The Kingpin. If you've ever wondered what it would be like if Spider-Man "let loose", then this is a fight you will want to see.

In the second section of this trade, Spider-Man teams with none other than the Sandman to help prove that his father didn't commit murder. This story also involves a future Uncle Ben and Spider-Man from 2211. We also witness the return of The Other, and it needs to reproduce before it dies. Who is chosen as the lucky father of The Other's spider spawn?

To complete this trade, we have a back story for Sandman, young girl's sweet dreams and a story about J. Jonah Jameson coming to terms with his relationship with Spider-Man. The Jameson story is well worth the price for this trade all in itself.

The art is typical of the Spider-Man series, and doesn't disappoint. My biggest problem that I have with this trade is the idea of time travelers. I think there could have been a better way to tell the tale without involving time travel. This is a true "jump-the-shark" piece, but this trade is still worth reading.
Posted by John "Zanziber" Rogers at 6:18 AM
Email ThisBlogThis!Share to TwitterShare to FacebookShare to Pinterest
Labels: #ThrowbackThursdays, Reviews