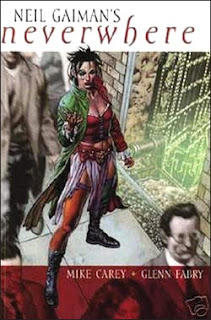 I've loved Neil Gaiman's writing ever since I read my first Sandman trade back in the 90's. Gaiman didn't write this trade, but his book Neverwhere was the cornerstone for this trade. Neverwhere is a great book, and a wonderful BBC mini-series.

I think what really drew me to this trade was the fact that it mimiced the World of Darkness system Changeling: The Dreaming. A world where elves, troll's and satyr's are real, but their true seeming is hidden. The BBC series originally opened my eyes to this masterwork. After watching it, I read the book and now the trade.

This story revolves around the central characters of Door and Richard Mayhew. Door is running from a couple of wouldbe assassin's, and Richard becomes entangled in the whole mess when he walks the good samaritain route to help her on the street. With that simple act of kindness, Richard looses himself into a world he never knew existed.

Mike Carey adapted Gaiman's work extreemly well, and is complimented by the crafty art of Glenn Fabry. This duo works well together, and I would love to see more work from them. I'm just beginning to read more work from Carey, but I remember Fabry's work from Preacher. Unfortunately, this is another series of trades that I owned, read and had to sell. I look forward to reclaiming the Preacher series and re-reading it.

If you're a person who enjoys fantasy reading, or are a role player like myself, I feel you'll love reading this trade.
Posted by John "Zanziber" Rogers at 11:35 AM
Email ThisBlogThis!Share to TwitterShare to FacebookShare to Pinterest
Labels: #ThrowbackThursdays, Reviews