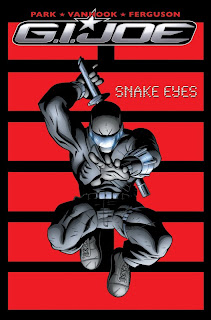 As much as I love G.I. Joe, Snake Eyes and IDW, I can’t give this one a big thumbs-up. This trade is nothing short of a glorified promotion of Snake Eyes. Go figure with Ray Park writing this trade. Anyone who has seen the movie knows that Ray is the actor who plays Snake Eyes in the live action feature. Stick to acting and martial arts, Mr. Park.

This trade starts out as someone is impersonating Snake Eyes and killing major criminal element in Japan. The impersonator not only has a sword with the Arashikage clan symbol on it, but he also has Snake Eye’s uniform as well. How on Earth does that happen?

It turns out that the impersonator is a hero worshiping pyromaniac from when they were both studying at the temple. It seems that Storm Shadow was not the only enemy that Snake Eyes made while training. This plot is weak and the ending is incredibly predictable.

Don’t bother with this trade. It’s not worth reading. This was a shameless promotion of Snake Eyes and nothing more.
Posted by John "Zanziber" Rogers at 1:12 PM
Email ThisBlogThis!Share to TwitterShare to FacebookShare to Pinterest
Labels: #ThrowbackThursdays, Reviews