Fables: Sons of the Empire 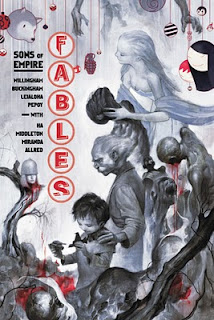 Title: Fables: Sons of the Empire

The continuing saga of our cast of characters from Fabletown and beyond does not disappoint. It's this latest volume that begins the path to war between the citizens of Fabletown and the Empire. The aftermath of the recent actions by both Boy Blue and Bigby in the Homelands, cause the formation of a war council by the Emperor.

In this trade, we learn more about Hansel of the Hansel and Gretel tale, as he is chosen to be the official envoy between the empire and Fabletown. Pinocchio lets his imagination run rampant as he describes what would happen in retaliation to the proposed extermination of all life on Earth. A little extreme retribution for what the Fables have done against the empire.

There are also a few smaller tales of various fable scattered throughout the main story. We have a day in the life of Rapunzel, the maniacal machinations of a porcupine, a day in the life of Kevin Thorne, a tale of the 3 Blind Mice on the Farm, and then finish this trade off with a number of burning questions from fans.

We also have 2 tales with Bigby, Snow and family. First being a Christmas tale where we see the world’s most notable fable, Santa Clause. After Christmas, the entire family packs up and head’s to visit Grandpa North. You could cut the tension between Bigby and his father with a dull knife. We also get to meet Bigby’s brothers, and hopefully the reunion is received well.

I recently found out that they are planning on making a Fables movie. As long as Bill Willingham is on board, I look forward to the end result.

Add this trade to your collection. I am currently reading volume 10, Fables: The Good Prince, and look forward to writing a review of it this weekend.
Posted by John "Zanziber" Rogers at 2:13 PM
Email ThisBlogThis!Share to TwitterShare to FacebookShare to Pinterest
Labels: #ThrowbackThursdays, Reviews