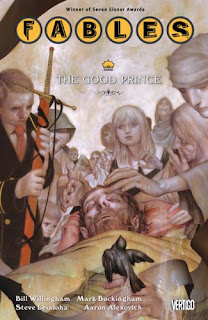 In this trade, we have 2 stories that center around Flycatcher... the once trusty janitor of the Fabletown business office. He's recently regained his memories, and has spiraled into a depression that nobody seems to be able to get him out of. The good thing is that he's no longer a frog. (See Fables: Sons of Empire to find out how.)

As Flycather, now Ambrose, revives from his funk, he takes on a new role as leader of an army. He find the armor of the Forsworn Knight and his new guiding light in life: Lancelot. With the armor, Excalibur and Lancelot by hi side, Ambrose does the unthinkable. He jumps down the Witching Well. At the bottom is where he finds his new army in the form of the souls of all the dead fables that have been tossed down there over the many years, including such backstabbers as Bluebeard and Shere Khan.

With his new found army in tow, Prince Ambrose heads towards his ancestral home within the Homelands via a portal from within the Witching Well. After arriving in their new home, and with much help from Weyland Smith, the army of the dead rebuild the dilapidated kingdom into the new kingdom of Haven. From this point on, our once humble janitor, then Prince is now a rightful King of his own domain.

Of course, the new kingdom doesn't thrive without a few problems, in the form of the empire's armies wanting to squash it. With King Amrose's new powers, the army of Haven are able to hold off every army that comes to attack. The final army sent by Geppetto is comprised of ever single wooden soldier carved from the sacred grove, called the Golden Horde. This army doesn't need to sleep, eat nor do they get frightened by an army of ghosts. You'll be surprised by how King Ambrose pulls of a victory from this grand army of the empire.

While the primary focus is on Ambrose and his adventures, there ares a few scenes from Fabeltown depicting the military affairs and build-up. They even purchase 2 major private training facilities to aid in the training of their newly amassed army. One facility for commando training, and the other for sniper training. It seems to me that the citizens of Fabletown are bringing guns to a sword fight, especially when there's a small little interlude of "Mr. Bester" looking for MOAB's (Massive Ordanance Air-Blasted bombs) and Bunker Busters.

In the midst of all things war related, we have small section of this trade that shows the training of Fables for war, and the secret that Bigby and Snow shared with their children on their 5th birthday. This little interlude is entertaining and the art is very appropriate for the tale.

Add this one to your growing collection. This is volume 10 of the 13 that have been published thus far. Volume 14 is expected to his store shelves in December of 2010. It's a good thing that there's also the Jack of Fables series of trades that have been published, and Cinderella: From Fabletown with Love coming in August. These books should hole me until more Fables trades are published.
Posted by John "Zanziber" Rogers at 6:38 AM
Email ThisBlogThis!Share to TwitterShare to FacebookShare to Pinterest
Labels: Reviews