Lucifer: Devil in the Gateway 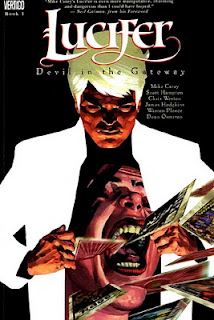 Title: Lucifer: Devil in the Gateway

I'll admit that I've been on a Vertigo kick recently. I've been so wrapped up with reading Fables that I wanted to continue down the path. I'm not playing favorites, and I will write reviews for other publishers soon.

I remember reading Lucifer's first appearance in the Season of Mist trade from Sandman. Lucifer decided to close Hell and start a new life. This trade is where we get our first glimpses at Lucifer's new life away from Hell. What's in store for The Lightbringer? What would earth be like with him walking the streets?

My biggest problem with this trade is the lettering. At times, it became very difficult to interpret what I was supposed to be reading. Thankfully, this was remedied about halfway through. The reason for the odd lettering is to show the differences between characters, I do understand that. This is perfectly fine if the lettering were legible.

The first half of this trade... the section from The Sandman Presents: Lucifer... is where we find this lettering and poor penciling. The art looks like it was taking from basic sketches and the inker(s) didn't provide any depth or clarity. As a person who has taken up quill and ink in the past, and knowing what resources are available for digitally inking, I'm quite surprised that this was accepted for publication. Fortunately, it seems as though the regular series doesn't have this problem.

After dredging through the first half of this trade, I was almost ready to put it down for good. I'm glad I didn't. The storyline entitled "A Six Card Spread" shows Lucifer on a personal mission to find out if the letter of passage, given to him for his recent service to Heaven, is legit and what strings are attached. Could the former lord of Hell be going back to his first home? That would make for a very short series now, wouldn't it?

The last part of this trade is only remotely tied to Lucifer himself, but involves 2 young girls. One of these girls is attempting to find the others murderer, and stops at nothing to find the answers. This perseverance nearly costs the young girl her life, and that's where Lucifer steps in. This story is a very interesting look into what it must feel like for a young girl who can see the dead and has a spark of magick in her from her Grandmother's.

If you can get through the first half of this trade, the rest is well worth the read. I've glanced over the next couple of volumes, and it looks as though the art is fairly consistent. No telling what the lettering will be like. I'll keep you updated.
Posted by John "Zanziber" Rogers at 5:35 AM
Email ThisBlogThis!Share to TwitterShare to FacebookShare to Pinterest
Labels: Reviews