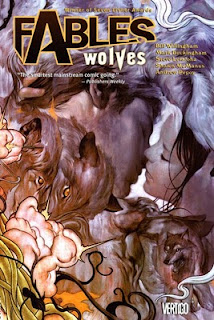 At the end of Fables: Homelands, Prince Charming sent Mowgli on a mission that would allow him to free Bagheera; find Bigby Wolf. The only problem is, Bigby doesn't want to be found.

Mowgli follows Bigby's trail all over the world, but when he realizes that he's looking in all the wrong places, Mowgli goes native. It's good that he was raised by wolves. As is suggested by the title of this particular volume, there is a great deal of wolves. From normal wolves to Bigby and Snow White's children.

When Bigby finally returns, Prince Charming sets him to the task of going back to the Homelands to deliver a message to the Emperor. In a nutshell, the message is "You screw with us, we'll screw you right back... only worse." How do you think that went over? How do you think it was delivered? This part of the trade brings Bigby back to his days in the wars.

When Bigby returns from his mission, then we see why he took such a life endangering mission. Do you believe that Bigby Wolf could live a tale happily ever after? Pick this trade up and read it to find out the answer.

The last part of this volume envolves Cinderella in a diplomatic capacity with the folk from the Cloud Kingdoms. Is aparent that Cindy is not cut out for diplomacy and should keep to being a spy. And everything takes 3 days to accomplish. Since I've always believed that 3 is a magic number and has been used in so many fairy tales, I found this incedibly funny. (i.e. 3 Bears, 3 Little Pigs, 3 Blind Mice, etc.)

I enjoyed reading this volume as much as I have the previous volumes. I hope they never end this series, and I will always have something good to read.
Posted by John "Zanziber" Rogers at 11:20 AM
Email ThisBlogThis!Share to TwitterShare to FacebookShare to Pinterest
Labels: Reviews