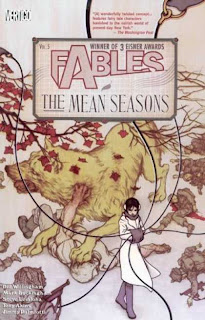 This next volume of the Fables series includes a behind the scenes look at plans that Bigby has brewing that nobody is aware of, as well as a glimpse into his past. There was mention of Bigby playing a part in several war's in one of the previous volumes. Here we get to see what part he played during World War 2 against the Nazi's. You may be surprised.

This trade also gives us the winner in the mayoral race, and some of the aftermath. Does Prince Charming charm his way into the high office of Fabletown, or does King Cole manage to keep his job? Both profess to be the "Hero of the Battle of Fabletown." Who will be in control of all of Bluebeard's treasure?

You will also find the story of Snow White having her children and what happens to her after the election. Let's just say that Snow gets more than she bargains for, but that doesn't stop her from loving all of her children. Several of the children take after their father, and that means that Snow can't live in Fabletown any longer. We also find out that they all received a special gift from their father's side of the family... specifically their Grandfather. How does a single mother take care of 6 children that can float and fly? Luckily, the fables at the farm have trained and are prepared to provide the help Snow will need. We also find out that Snow may have had more children than she knows, which foreshadows to a possible interesting story with Bigby. We'll see what happens.

In the aftermath of the Battle of Fabletown, many of the fables have decided to leave, and Boy Blue has decided to take on a crusade back in the homelands. It also seems that someone's taken the contents of one of Bluebeard's treasure room, estimated between 2 and 6 billion dollars! Yes, billion with a "B". Who would do something like that and what are their intentions? I'll give you a hint... you'll find out in Homelands, the next volume in this well written and beautifully illustrated series.
Posted by John "Zanziber" Rogers at 7:09 AM
Email ThisBlogThis!Share to TwitterShare to FacebookShare to Pinterest
Labels: #ThrowbackThursdays, Reviews