Fables: March of the Wooden Soldiers 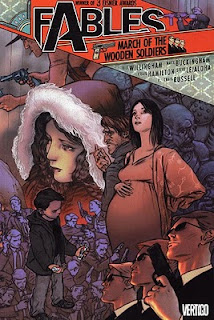 The Adversary has decided to invade Fabletown, with Red Riding Hood as the General. We also learn a little bit out Boy Blue, who is more than a simple trumpet player. Prince Charming also believes that he can run the town better than King Cole, as he throws all of Fabletown into its first election in centuries. You can no doubt see a pregnant Snow White on the front cover.

It seems like with every new trade, Buckingham includes a few more fables to the mix. I wonder how far they're going to go. Where's Rapunzel? The 3 Blind Mice? Maybe that's going a little too far, or maybe I missed the mice in Animal Farm. Are they going to go all out like they have with the various Shrek movies? Include the Gingerbread Man? Why not?

Pinocchio has always seemed to be a background character in these first trades. Here, he becomes a central focus behind the invasion of the wooden soldiers. They want to take Pinocchio back to the Homelands. There's a letter from the Emperor that gives a little foreshadowing to events that will happen in volume 6; Homelands.

You never read about politics in the various tales these fables are taken from, but apparently democracy has seeped its way into Fabletown as Prince Charming politics for King Cole's position of mayor. What does this say for the future of Fabletown? As with all political races, this one is fueled by the new found treasures left by Bluebeard's untimely demise. Ironic that Prince Charming's crime... which King Cole found him not guilty, by lack of evidence in the previous volume; Storybook Love... provided Fabletown with a hearty boost to the coffers, that inspired Charming to run for mayor.

As always, pick this trade up and add it to you collection. You won't be dissapointed.
Posted by John "Zanziber" Rogers at 6:29 AM
Email ThisBlogThis!Share to TwitterShare to FacebookShare to Pinterest
Labels: Reviews