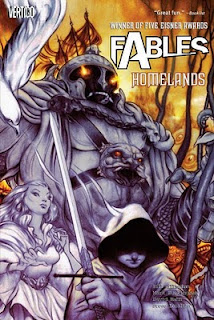 This volume of the Fables series starts off with a story about Jack of the Tales. He's recently absconded with a ton of treasure from one of Bluebeard's treasure rooms (see Fables: The Mean Seasons), and has left Fabletown for Hollywood to make it big. Jack makes a run at becoming immortal by starting his own production company to produce 3 movies base on his own life. I'm pretty sure some of the tales have been elaborated to make for better movie watching, but they seems to become bigger that the Lord of the Rings and Star Wars combined.

The next tale in this trade revolves around Bot Blue and his quest in the Homelands to free Red Riding Hood. With the Witching Cloak and Vorpal Sword in his arsenal, Blue is a seemingly unstoppable force. It's in this tale that we finally get to meet the Adversary/Emperor. I'll be honest, I wasn't surprised about who the Adversary was, but I was about how they actually came to power. This tales proves the old adage: Power corrupts, and absolute power corrupts absolutely.

There is one small section in this trade which features a story that includes a new character which I found missing since Animal Farm. We are finally introduced to Mowgli from the Jungle Book. In Animal Farm, we saw Shere Khan and Bagheera, and now we also find Baloo. Jungle Book has always been one of my favorite tales, so I am very appreciative of this inclusion into the Fables series.

We find that Mowgli has been acting as one of Bigby's "tourists" (read: spies), and Beast has recalled him to Fabletown to give him a new mission: Find and bring Bigby Wolf back to Fabletown. What does Beast have in mind for Bigby? Are the stresses of being sheriff getting to him? Perhaps he has more questions for the former constable now that he's had some time to walk in Bigby's shoes. We have to wait and find out.

Again, I close another Fables review with my recommendation to read them all. I'm looking forward to the next volume, and hope to pick it up soon.
Posted by John "Zanziber" Rogers at 6:38 AM
Email ThisBlogThis!Share to TwitterShare to FacebookShare to Pinterest
Labels: Reviews