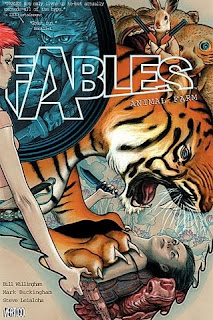 If human looking fables get to live in Fabletown in New York, where do the 3 Little Pigs, Shere Khan and the 3 Bears live? With the rest of the inhuman fables... upstate New York on a farm, of course.

As we've learned in history class, segregation never works the way people hope it to. When you keep a group of individuals secluded without any freedom to leave, you generally think of a prison. Other people could think of this like a concentration camp or commune. In either case, the people being held tend to become resentful. Now take that resentment and brew it for several hundred years, and you get yourselves some very unhappy animals.

Viva la revolution. All these fables want is the ability to go outside the boundaries of their fair farm... and they are willing to kill for this freedom. The 2nd amendment of the United States constitution give us the right to bear arms. Those on the farm have taken this as the right to arm bears. Scary thought, huh?

In this trade, we also find out what happened with Goldilocks. She's living on the farm, and is a human supporter of the animal revolution. How far is she willing to go? How committed to this cause is she? Only one way to find out. Read this trade.

As I read through each volume in the Fables series, I've noticed that even though the artists change, the art actually stays fairly consistent. It's not like reading the X-Men series where for several months you have Jim Lee providing the art, and the next thing you know, John Romita Jr. has taken the reign. You can definitely tell the difference between their unique pencil styles.

I've already read through the first 4 volumes, and am currently working on the 5th. I look forward to reading the rest of the series. At the time of this writing, there are currently 13 volumes to the Fables series. You can count on the fact that I will provide a write-up for each volume.
Posted by John "Zanziber" Rogers at 9:55 PM
Email ThisBlogThis!Share to TwitterShare to FacebookShare to Pinterest
Labels: #ThrowbackThursdays, Reviews