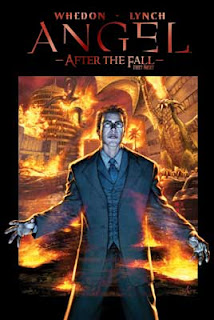 I thought I would try out a different format for a couple of the trades in the Angel series. I hope you will enjoy this post as a "two-fer". If you like or dislike this format, let me know so I can try this again with other series that I have read, or make sure I don't do it again. Thank you in advance for your comments.

In the continuation of Angel: Season 6, this specific trade gives us a little clarity as to what exactly happened after the final television episode. Learn what happens to Gunn, Wesley, Lorne, Gwen and the rest of the gang. To bring this story to T.V. would have defiantly cost way too much. I'm thinking at least a full length movie budget for this series... or maybe only a few episodes with the likes of Betta George and the dragon. A little to epic to regular television, I would think.

Since this trade brings together several different storylines from different characters, the multiple artists working on this title does work. Not too many chefs in this kitchen. Each bring a really good feel to their specific section. I think the "Civilian" section, penciled by Kevyn Schmidt, is probably my least favorite to look at... but the style works well for the story.

If you're reading this series, keep doing so. You won't be sorry. 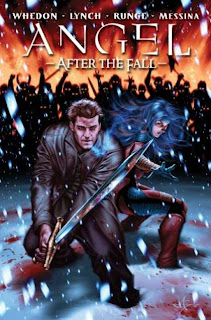 The next volume of the Angel series is well worth the read. In this volume, we learn more about what Angel is going through, and what possible negative side effects come with Angel's new life. (Hope I didn't say too much.) We also find out that Cordelia is still apart of the gang as well.

This trade has several pieces that made the television series fun to watch. There are a few sections where the art isn't top notch like I've found in most of the rest of the series. Looking at the table of contents, it looks like Nick Runge is responsible for this discrepancy. The art doesn't take too much away from the story, thankfully.