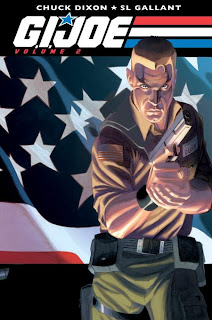 The trial of Scarlett. The return of Mainframe. Actual "evidence" of Cobra. IDW has really done a great job with this series. In this trade, we are also introduced to Cover Girl and Springfield. Again, this series is not your father's G.I. Joe from the 80's.

This trade still makes me want to collect the trades from the original Marvel series for nostalgia's sake. There are so many differences in the art and stories of the different eras. The art was more cartoon-like and the storylines were PG rated since comic books were primarily geared for kids. Now we have more adult themes of sex and violence. The terrorist threats of Cobra in the 80's was kicked under the rug as apart of the Cold War. Now, not so much.

Some storylines endure the test of time. The MASS device was an interesting concept that was lacking in the cartoon series. Chuck Dixon has removed the campiness that was associated to it from the cartoon and made it feel like this could seriously be something that scientists are working on. Thank goodness that Dixon works for the forces of good.
Posted by John "Zanziber" Rogers at 2:28 PM
Email ThisBlogThis!Share to TwitterShare to FacebookShare to Pinterest
Labels: #ThrowbackThursdays, Reviews