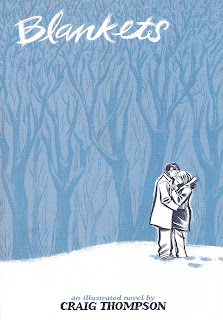 This was the first title that someone had suggested I give a review for, so here it goes.


As you can tell from my previous reviews and my collection of trades and GN's, this book is a little off my normal reading choices. I usually go for the standard supernatural, superhero or G.I. Joe titles. I like the flash, bang and pizzazz of the art and the intensity of the storylines. I also enjoy having a long time title that has years of back story that I may or may not have already read, and the continuity enthralls me. In the 90's, I fell victim to the comic book male fan stereotype and became drawn into the word of women with huge breasts being the ideal form for the female super heroine.

I would describe this book as an illustrated autobiography. There are no superheroes or villains, in the typical sense of the terms. There's not a group of superhuman people running around in spandex trying to save the world. There's simply Craig, his family, his girlfriend, her family and the people they interact with. The major plot point of this book isn't how will they save the world this time, it's how is Craig going to turn out in the end.

When I began reading this book, I had no preconceived notions about what I would find. I didn't know that this book would have any type of religious undertone, and when it became apparent that there was, I did think about putting this book away. I'm glad I didn't.

Craig came from a family who believed God, felt that they were "good" Christians, went to church and lived they way that "good" Christians should. When Craig was in high school, his minister suggested that he go into the ministry in lieu of going off to college and getting a career. Having thought that way once myself, I felt I understood what he was probably going through. When some of the other parishioners told stories of people going to art school and non-Christian colleges, I hoped that Craig would make the same choice I had. To find out his choice, I recommend reading this book.

This book was more about a Christian upbringing; this was also about a boy growing up to become a man, having to share a bed and room with his younger brother for many years, going to Christian camps, meeting his girlfriend and eventually helping her through a rough period of her life. I laughed... I nearly cried a few times... and more than once, I ask "Why in the hell?"

Be warned! This book is HUGE! 592 pages. This is the biggest graphic novel I have ever read. Don't let the size fool you. This book is a good read, and I highly recommend it to all. Keep an opened mind when you read this. You won't be disappointed.

Posted by John "Zanziber" Rogers at 11:42 AM
Email ThisBlogThis!Share to TwitterShare to FacebookShare to Pinterest
Labels: #ThrowbackThursdays, Banned, Reviews