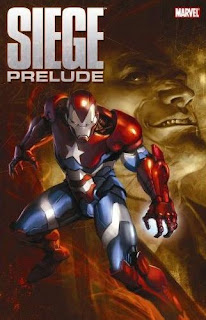 After reading Dark Avengers, Vol. 1: Assemble, I was really looking forward to reading more about this new Avengers team. The trade had me excited for the continuing storyline of where Norman Osborn was going to take this odd-ball group of "heroes". I've always loved Venom, but since I don't regularly read any Spider-Man titles, I didn't realize that this Venom was a different person. Even better, he was the former Scorpion! Bullseye as the new Hawkeye and Wolverine's son as the new Wolverine. How messed-up, but what a heck of a team. I have since began learning what I've been missing.

I truly think that everything that Brian Michael Bendis is gold, and have yet to see him write something I didn't like. With that being said, I wish that he would've written for all the issues that spawned this trade. The Cabal was hard to understand. It looked like Doom and Namor killed Osborne at the end of "...And I'll Get the Land." If that's true, how is it he's in the other issues? "How I Survived Apocalyptic Fire" was alright, but I've always liked Emma frost. "Family Trust" was predictable but a good story with good art. "The Judgment of Namor" didn't make much sense either, and I couldn't stand the art. There's not much I can really say about "Dinner with Doom". It did help tie the events of Thor into everything else.

I hate to say anything bad about where these characters all came from, but I also found it a very hard read to get through all the Green Goblin material by Stan Lee and the reprint of Marvel Spotlight #30 by Len Wein. The only endearing quality of the reprints are John Romita's pencils. If I grew-up when Stan was actively writing, I may not have been such an avid collector. Sorry Stan. I realize that in those days dry writing was the norm. I'm grateful for the modern writers that give their writing as much life to the story as the illustrations do.

I am still intending on reading the rest of the Siege trades once they are released, simply because I am very curious how it will all end for Osborne and the rest of the Avengers. This trade didn't seem like it was necessary to read, so I wouldn't recommend picking this up unless you really want to waste your hard earned money, or are a completionist* like myself.

(*Completionist: A person who has a preference for completing anything they set their mind to. Collecting, being my vice of choice. Comic, TPB's, action figures, RPG's and a multitude of other things.)
Posted by John "Zanziber" Rogers at 10:40 PM
Email ThisBlogThis!Share to TwitterShare to FacebookShare to Pinterest
Labels: Reviews